There’s a red phone box beside the Storey Arms at the base of Pen y Fan in the Brecon Beacons. Not just any old phone box, this one is so iconic the Welsh government have just provided funds for it to be restored to its former glory.  It marks the start of the Fan Dance, the 26km route march which all entrants to the SAS have to complete within 4 hours while carrying a sodding great 15kg pack. Nowadays there’s also a civilian version. Same route. Same weight requirement. Fortunately they also do a Clean Fatigue version where runners only have to carry essential safety gear. This is good news for me. I think.

It’s a cold January morning and half an hour ago I watched as the hard core entrants set off up Pen Y Fan, an army thunder flash setting them on their way. All their packs had been checked at the start to see they met the weight requirement. A quick briefing and they were on their way, disappearing up into the gloom and low cloud that covers the mountain. There won’t be many glorious views today.

Now it’s my turn to wait for the start of the Clean Fatigue version. No weight check, just a quick look to see I had all the required safety gear. All human life is here. There are the usual racing snakes who look fearsomely fit. There are joggers and hikers of all ages. Then there’s the weekend warriors like me who really should know better. We’re all trying not to feel intimidated by all the ex-army folk, ex-SAS many of them I suspect, who run the event. Some are huge. Others are small and wiry. All of them look equally hard. Makes you glad they were on our side.

I’ve learned that it’s always a good idea to wear fewer layers than you think sensible and to start any event cold. You’ll soon warm up. Standing here now though I wish I wasn’t quite so cold and begin to faff about, trying to get it right. It’s time for our briefing. Don’t be stupid, don’t get lost and help anyone who might need it. Then another thunder flash, a few ironic cheers and we’re off. It’s good to get started.

Mentally I’ve chunked the course down into different sections and I’ll be aiming to pick them off one by one, not thinking too far ahead. The first rendezvous point is at the top of Pen y Fan where we’ll be checked off. I’ve been up here a few times and know it takes me about an hour. The climb away from the phone box is steep and sure enough, within 15 minutes I’m boiling hot and wishing I’d worn one layer less. The banter which was going on before the start has stopped now. We’ve all gone quiet and already we’re starting to spread out.

We’ll all have our different reasons for taking part today. For myself this is the first of 19 events I’ll be doing in 2019, raising money for Winston’s Wish, a wonderful charity which supports bereaved children. Tucked away in my pack is a small teddy bear who’ll accompany me on each event. He’s called Winston (naturally) and I didn’t half feel a berk when the ex-forces guy had clocked it during the kit check. A raised eyebrow, faint scorn and I’d spluttered an explanation.

Half an hour in and it’s all going well. I’m hanging on to the heels of a group who have clearly done a lot of this type of thing. I know that the final stretch up to the summit gets harder and am surprised and pleased when we’re directed right, onto a path so well worn it’s nicknamed the Motorway. The going gets easier. We’re in low cloud now and the summit is hidden. Although the temperature is dropping as we rise it’s actually a pretty benign day for January. There no snow unfortunately but I’m not complaining.

Sooner than expected the tent which marks RV1 looms out of the cloud. I glance at my watch. 50 minutes gone, 10 minutes quicker than expected. That’s a real boost. I’ve set myself various target times for today. Target A is 4 hours. Target B is 4:15 and Target C is just completion. It’s good to be ahead of time at this stage. It’s cold too. Hat and gloves on, I push on to RV2.

It’s downhill the next stage but to start with it’s still slow going. We’re going down a stretch known as Jacob’s Ladder which is both steep and icy. There’s much cursing as a few people lose their footing but nothing serious. Then the path levels out and at the same time the sun breaks through.  Ahead of us the path winds down to RV2 in the Taf Fechan Forest. There’s a chance now to press on, watching our footing as we go. Coming the other are the fully laden people who set off earlier. That includes a group of six serious looking guys in army gear, the leader carrying an enormous banner. They’re going nearly as fast uphill as I am downhill. Deeply impressive and I have to remind myself not to compare myself to others.

After a while the path turns into a forest track, the easiest going section of the entire route. The traffic is building and I’m managing to catch a few other Clean Fatigue people. I have to remind myself that nothing I achieve today will really stand comparison with people who are doing this fully laden. They’ve got 15 kg on their back. I’ve basically got safety gear plus spare socks and a Snickers. Literally lightweight.

RV2 arrives and I glance at my watch. 2 hours in and I’m doing ok. One can waste a lot of time at pit stops like this so I quickly take off a layer, swig a drink and take a bite of that Snickers. Then it’s time to head back the way we’ve come, retracing our steps with Jacob’s Ladder the most testing stretch of all. That should be in about 30/40 minutes. Coming the other way I see a guy who is clearly suffering. He’s bent double under his pack and seems greatly relieved when I tell him it’s not far to the RV. I don’t give much for his chances of completion.

It’s steady going, the long pull back up the track. I’m passing plenty of fully laden folk and can’t help but feel faintly embarrassed every time I do so. They’re having to work so much harder than me. I’d hoped to be back at the summit of Pen y Fan after three hours but realise that my timings were overly optimistic. There’s time to look around and remind myself how good it is to be out in the Brecon Beacons.

When Jacob’s Ladder is about 20 minutes away I swallow a double espresso gel (disgusting) and a swig of water. I’d read a lot about this section and watched some entertaining videos on You Tube. It hadn’t seemed that steep coming down it earlier, had it? Then it’s upon us and I start the slow slog upwards. No-one’s talking. I look ahead, up into the cloud but decide that’s too depressing. Instead I keep my eyes fixed on the path and start counting steps. I get to 50, then count another 50. And another. Yes, Jacob’s Ladder is steep. It’s time to just think OFFO. (One foot in front of the other.) And then, at long last, the RV tent comes into sight. By my reckoning I must have been going for about three and a half hours but when I check the watch I see 3:10. Brilliant. Much better than expected. Must have been that gel.

We’re checked off at the RV and then there’s only one section left, the homeward leg back down to the Storey Arms. I’m running although my quads wish I wasn’t. I’m also taking care over my footing. It would be daft to come unstuck now. I’ll never make a fell runner. I catch up with another Clean Fatiguer who clearly doesn’t want to let me past but I’m pleased to drop him and keep pressing on. I won’t be sub-4 hours will I? A final stretch and then I can see the road below. In my head I can hear my son saying “Always make it a sprint finish Dad” and I speed down the final section. Yes, there’s the phone box and then I’m home. 3.42. Chuffed.

Once my number is checked off I’m ushered towards one of the army guys who presents me with an impressive Fan Dance badge while a photo is taken. Then it’s over to the tent for a drink and some hot food. I avoid sitting down, knowing that I’ll quickly stiffen up. We stand around swapping experiences and then it’s time to head off.

Driving home I reflect on what has been a great day. Lessons learned? I always pack too much and wear too much. Why? Get it sorted. Niggles I’d been worried about didn’t trouble me at all. Turning up wholly fit and free from injury only ever happens in running magazines.

But this is Event #1 done and dusted. 18 more to go in 2019. And on the radio that very afternoon there’s a sobering story about a 14 year old boy who has seen his father murdered. One can only imagine how much support he will need in the future. That is why Winston’s Wish exists, to help young people like him. And that is what this is all about. 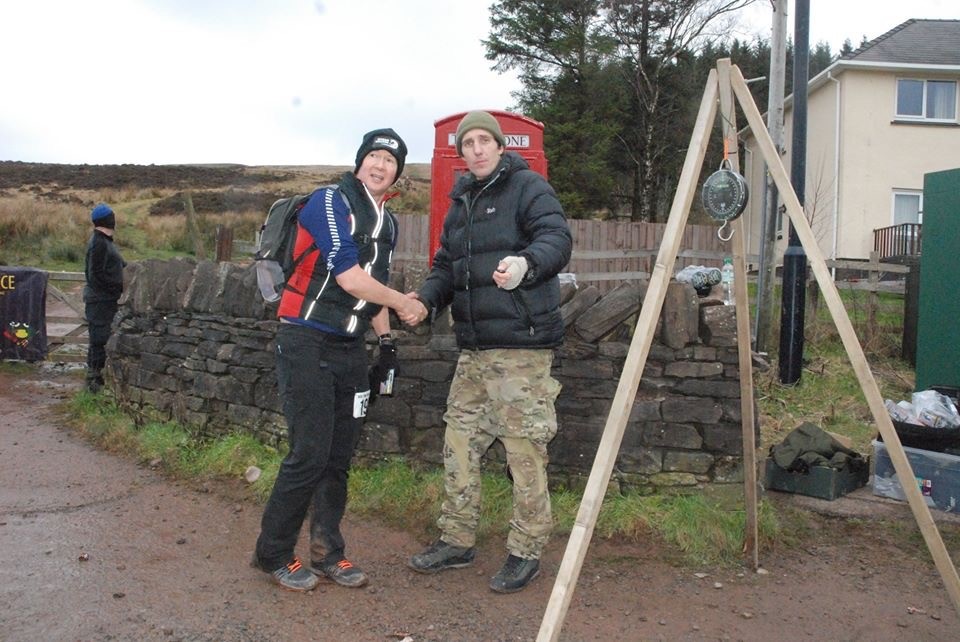