One of the attractive aspects of the Gloucester half marathon, for me anyway, is that it starts and finishes at Severn Vale School. I spent twelve happy years there as Head Teacher and it feels good, if a little strange, to be standing back in the Sports Hall queuing to register for the race. The place is heaving. In addition to people like me who are doing the half marathon there’s also people here who are doing a full marathon with a small, select group also taking on 50K.

It’s a cold January morning but I’ve already decided to avoid wearing loads of layers, only to be over-heating half an hour later. I might be slow to learn these lessons but I’m getting there. There are a few other Cirencester AC runners here and we swap stories of how little training we’ve done. I’m joined by Corinne Clark, an awesome triathlete. She’s off to Kona later in the year for the Ironman World Championships. Won’t be seeing much of her once the race starts. It’s also good to meet up with Delroy Ellis. He’s a well-known figure in the city, leading a charity called Increase the Peace who work with young people on reducing knife crime. He’s also does some very effective mentoring which is how our paths crossed. He tells me he’s running in memory of his father and I wish him well.

Goals for today? Difficult to say actually. Most of the half marathons I’ve done over the years have been as the final element of a triathlon and I’ve crawled round in some deeply unspectacular times. I ran the Forest of Dean half marathon last year, a trail run. Did that in 2:14. I decide that if I can beat that today I’d be chuffed. The thought of trying to break 2 hours has occurred to me but I dismiss it. Chasing all these times, some call it end-gaining, an unhealthy exercise. Better to focus on process, just trying to run as well as possible. Then the times will come anyway. (At least that’s the theory.)

At 10.00 we’re out in School Lane awaiting the race briefing. Stuffed in the pocket of my shorts is Winston, the bear who is accompanying me on all my events, a reminder of what this is all about. I’ve been to better organized events but these people are giving up their precious time on Sunday so it’s time to be charitable. Then, without the briefing happening we’re off. It takes a few minutes to get across the start line but when I do I start my watch.

I’ve decided to run at about 6 mins/kilometer, given that they’ve put kilometer markers out. I’m used to working in minutes per mile and have changed the settings on my Garmin. The last time I was around these streets it was to encourage late-comers to school with a bit of litter picking thrown in. There are plenty of spectators around and I’m half expecting a shout of “Hey, it’s Mr Rowland” (or worse) but clearly I’m running too fast to be recognized. Right.

The first few kilometers have passed and I’m pleasantly surprised by the pace. I’m ahead of time but feeling good so I decide to stick at it. I liked something I read recently, “Don’t be stupid in the first half of a race. Don’t be a wimp in the second”. I decide I’m not being stupid and push on.

The course takes runners straight out for a while, then it’s two loops and back the way we came to the finish. I decide to stay at the same pace for the first loop, checking out the route, which seems fast and flat, and then push on if I can on the second loop. There’s a drinks station coming up and I take a gel and a swig of water. This is going well.

I’ve been learning the hard way in recent months that the only real way to improve as a runner is to go out with people quicker than you. I’ve been towed round Cirencester Park on a Sunday more times than I care to remember but now I’m feeling really grateful. I manage to pick off runners ahead of me but before I can start feeling cocky some of the marathon runners fly by. These are the real runners. They started slightly later than us and the front runners leave us in their wake. I remember not to compare myself to others; much better to compare myself to how I was a few months ago. Just when I’m starting to feel fairly confident of having a good race the outside of my left knee starts playing up. Rats. I slow down a fraction and it isn’t getting any worse. The end of the second loop is coming up and I take a second gel which hopefully will kick in for the final few kilometers.

Then it’s straight back for those final few kilometers. I think I’m ahead of time but my mental arithmetic seems to be as sticky as those gels and I can’t work it out. I’m trying not to glance at my watch all the time and just concentrate on picking off as many runners as possible.

Down through an underpass, up the other side and then there’s the finish up ahead. I’ve been finishing all training runs with a sprint which I’ve hated at the time but now, once again, I’m grateful. The line seems to take an awfully long time to arrive but then I’m over it and looking at the watch. 1.58. Blimey. That’s a PB by 15 minutes and it feels doubly good to be sub-2 hours.

Heading back to the Sports Hall I bump into Delroy who has had a great race, 1.45. Very impressive. A couple of quick photos and then it’s home time. This has been a good morning and I’m chuffed to have finished 2 events out of my planned 19 for Winston’s Wish by mid-January.

Later at home I look at the results and see that Corinne ran a superb 1.27, a PB I gather. No wonder she’s off to Kona. Already I’m looking forward to the next event, the Endurance Life South Devon trail race. I’ll be tackling the marathon distance along the coastal path which is very up and down. These will be 27 country miles so I’ll be focusing on completion, not chasing times.

Also coming up is some training with Winston’s Wish on becoming one of their volunteers. Once I’ve earned my wings so to speak I’ll be spreading the word even further. It will be a privilege. 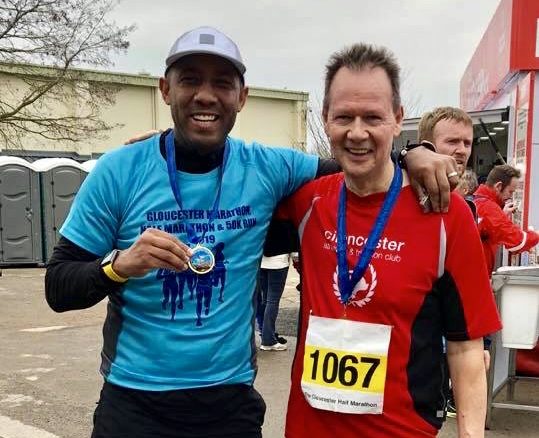